Science is just brilliant! Don’t you think? If you had known me as a child you would have never guessed these words would come out of my mouth.  I never used to think that science was great at all. Well to be honest I think I couldn’t stand it but I was never shown anything in the way that it is shown now to young kids to get them interested. When I was growing up there was no learning through play, learning wasn’t fun at all.

Our science teacher was an old fashioned lady who spent the lecture writing definitions and lots of theory onto an old squeaky chalk board. I don’t doubt she was a good at science, she certainly knew her stuff but she was not a great at capturing our imagination. There were no experiments, no hands on learning or visual demonstrations…there were just hours of tedious theory which I found boring and far from inspiring.

So now when Teddy started to show interest in various things there is now of course the Internet which is an absolutely marvellous thing where you can virtually find anything, just type it into a Google and wait for endless possibilities.  I feel like I’ve now got a second chance to learn and truly enjoy the beauty of science.

So let’s have a look at our latest fun activities and experiments:

1) what floats and what sink experiment 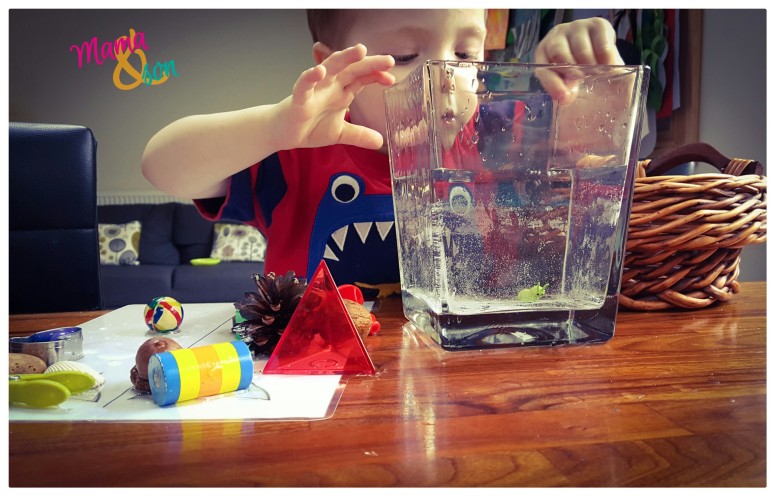 Today Teddy wanted to work with water and he told me he wants to see which objects float and which sink to the bottom. We have done this activity in the past and he always enjoys anything to do with water so I wasn’t really surprised when he asked for it.

This is a great activity which does not require extensive preparation and you don’t need to buy any ingredients just things you already have at home. All you need is some sort of dish to hold your water. I always opt for a clear one as I think it is much better for them to see the object sink all the way to the bottom and see that some sink rather slowly moving from side to side and some just plummet right towards the bottom depending on their weight. Then you collect miscellaneous items around your home to start the experiment.

I always try to select a good variety of objects which will float and which will sin. You can see we used some nature items such as pine cone, an acorn, a walnut, a chest nut and some items from the home such as a bouncy ball, a marble, coin, clothes peg or Lego block)

We also use a sheet of paper which is divided into 2 parts (on one side things that floats and on other those that sink) and after the object has been tested Teddy puts it to its rightful place.

You can use a little sifter to retreat the object back from the water but Teddy just loves to get his hands wet. 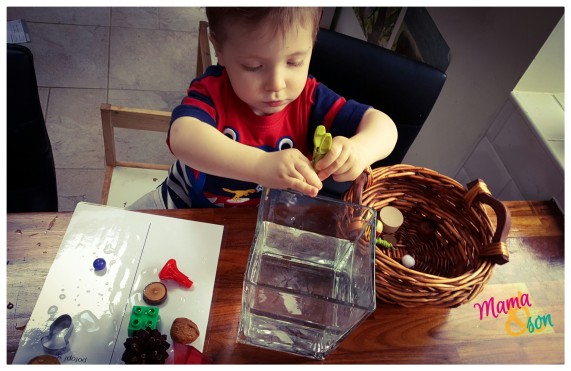 It was a joy watching him work today. He was so engrossed in the activity. Concentrating and working through all the objects and even saying before he placed the objects in the water weather they would float or sink. It was just great to sit back and just see him think and using his reasoning he has naturally acquired while growing up.

Well, after seeing him getting every object right I thought that today I could make it more interesting for him and see what happens if we change the water density. We have been doing loads of work on the ocean lately so this little experiment ties in nicely.

All you need is:

We have exchanged the glass vase we were using for the sink/float experiment and replaced it with 2 identical jars which I both filled with warm water (salt dissolves faster in warm water). Then I asked Teddy to add some sea salt into one of them.

He added few spoons full (depends on the size of your jar) and then mixed it thoroughly waiting for the salt to completely dissolve.

When we couldn’t see any more salt and water was clear once again I have asked him to place a hand full of olives into the jar which held just the water without anything in it. We have started with a bowl full of olives but even in warm water it took couple of minutes for the salt to dissolve, giving Teddy plenty of time to eat most of them.

If you have seen our video on Facebook you know what happens, all the olives have sank to the bottom of the jar. Then I asked him to retrieve them all and place them in the saline water where they have all stayed floating at the surface. He was just amazed, he kept looking at me, at them, at the jar and kept saying: ‘but they sank in the other jar?!’ he just couldn’t fathom what had happened.

I told him to try and place some back in the jar without salt and see what happened and he started retrieve some and putting them back into the first jar. That was great to see them next to each other, floating in one and sinking in the other. He was mesmerised and spent another half hour transferring them from one to another watching what happens.

The first experiment is great to introduce the topic of density to your children and explain them how it works. Every object weighs a different amount and therefore some of the lighter ones float and some of those that weigh more sink. It works better if you have objects about the same size with varying densities so children can compare the weights.

In the second experiment we look at water density and we know that by adding salt which will dissolve in the water we will increase the mass of it, making the water heavier and makes it possible for some objects that would normally sink to the bottom to float. You could talk to them about the Red sea for example which has rather high salinity making it almost impossible to sink there.

If you like what we do you can follow us on Facebook to see all our activities and fun experiment, especially Lava explosion in a jar while exploring liquid density

Thank you for reading us,